Back to all posts

I get a denial letter every time my Dr. asks for any treatment needed for Cancer. 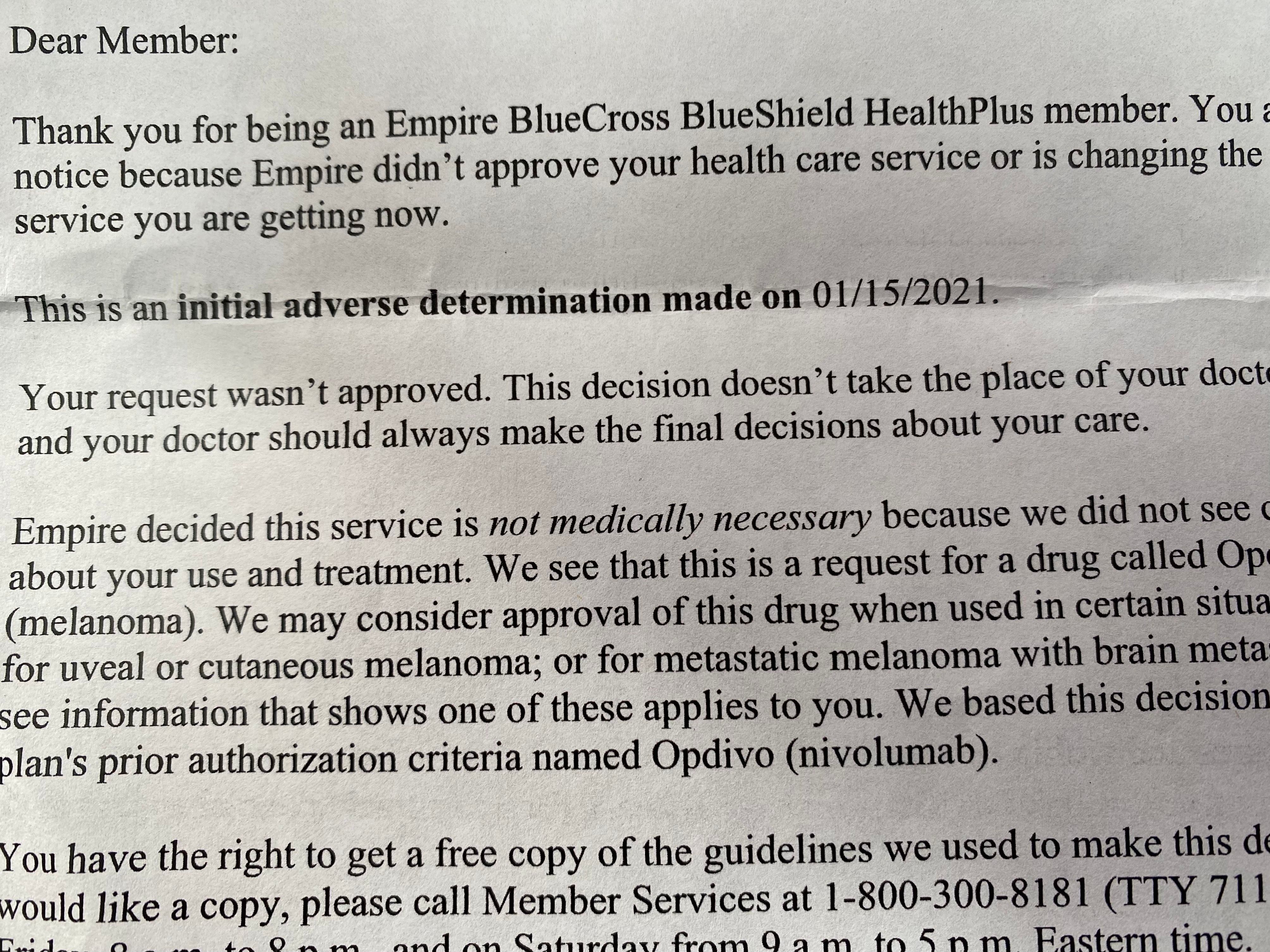 I have learned to not react to these letters. My doctors office has to submit these requests several times before they are approved. That includes the surgery I had last spring. I recently had to spend hours fighting a reversal of approval for a part of the surgery which involved moving a muscle to cover exposed blood vessels. The insurance company didn't think it was necessary. My surgeon did but the insurance company did not.

When I showed up for my Opdivo infusion in January, I was turned away because the insurance company didn't approve it. My doctor's office blamed the insurance company. The insurance company blamed the doctors office. I was left angry and frustrated. Exactly what I don't want as a person trying to heal from Cancer. Later that afternoon, I was called and it was approved. After I was made physically and mentally distraught. My husband had to miss work to take me to get the infusion.

The unprofessional behavior and poor communication in the scheduling of scans and treatments is shocking. My experience and observation is that there are so many sick people, the doctors are overwhelmed. Like the medical corporations they work for don't hire enough doctors or staff to properly handle the work load. It's nuts. It is deeply upsetting. My innocence and naivety about what it is is to be a sick person in the US has been shattered.

The constant struggle with the insurance companies is ridiculously time consuming. I don't feel cared for. The insurance company won't let me see my original oncologist anymore because she moved to a different hospital and because I don't live in an area that includes that new hospital. Certain cancer hospitals, like Memorial Sloan Kettering, only take corporate group insurance so, someone like myself with an individual policy can not get treatment there. It's all about the money they can bring in. Not the person with cancer trying to get help.

My new oncologist hadn't bothered to say hello or check in on me since October, though I asked her to, through her staff many times, and she was often mere feet away while I was getting treatment. Talk about feeling like a number and not a person. I finally had to complain. Now I will be seen every month by my new oncologist. But, why should it have to come to that? If we had a health care system that worked, the doctor would set a course and it would be followed. I would hope there would be quality care that involved knowing the patient at least a little. The patient load is way beyond what anyone could handle in a way that makes someone with cancer feel like they matter, like they are being truly cared for.

The health insurance industry makes billions of dollars every year. This is why we don't have health care for all. ANY politician who says we can't afford it is full of sh-- and most likely beholden to the financial contributions made to their campaign. I know people in Canada and England and their health care is fine. I don't believe or buy in to the people who say public health care is not good. If America is the greatest country in the world, well then, we can make sure our public health care is great.

There is one reason for all of this:

The well being of people is not the bottom line. Money is.

I pay taxes and have done so for a long time.

I want health care, education, social security and other basic things, like roads etc. And yes, programs for the indigent.

My wanting these things in exchange for my tax money does not mean I am a socialist. It means I'm practical.

And while Empire Blue Cross Blue shield might not consider my monthly Opdivo treatment as "medically necessary", the oncologists I've spoken to say without it I would most likely be dead in three years.